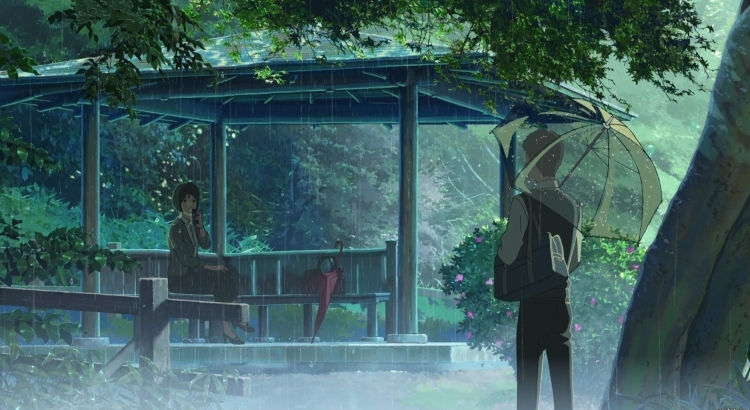 Everybody knows, has watched something by, or has heard about Hayao Miyazaki and Studio Ghibli. The two are some of the biggest names in Japanese animation today, with Ghibli and Miyazaki producing many films having both wonderful visuals and satisfying narratives. Spirited Away, Princess Mononoke, Howl’s Moving Castle – they’re just some of the movies by Miyazaki and Ghibli.

Miyazaki’s reputation is well-deserved, of course, but it’s always nice to find out about other animators. I have, actually, a specific Japanese animator in mind – Makoto Shinkai. Shinkai has a few full-length animated films under his belt, some shorts, and a commercial for cram school (a truly Japanese thing). While no one can really say for sure if he’s the next Miyazaki (going around the Internet, some are inclined to believe so, while others think this is some sort of blasphemy), Shinkai’s talent speaks for itself. His films – one of them being the popular 5 Centimeters Per Second – are always visually stunning and narratively sound.

I’d like to talk about one film in particular, however: his latest effort (and my personal favourite among all his films), The Garden of Words. Perhaps The Garden of Words is Shinkai’s most beautiful film to date, when it comes to graphics. The visuals are so realistic, so meticulously detailed, that it’s sometimes hard to believe that what you’re watching is not animated. Forty-five minutes of eye-candy is already a treat (some have even called it 5 Wallpapers Per Second, a title parody of another Shinkai film), but it’s the nuanced storytelling that makes The Garden of Words worth watching.

A brief summary: Takao Akizuki is a 15-year-old high school student and aspiring shoemaker, who skips school one rainy morning and meets Yukari Yukino, a 27-year-old woman eating chocolates and drinking beer alone in a Japanese garden. A connection is established by Yukari, who, before departing, recites part of a tanka to Takao. Takao is left to puzzle over the tanka.

It’s called The Garden of Words, but the movie doesn’t show a lot of actual, heard conversations between Takao and Yukari. Instead, the exposition is done through internal monologue and vignettes, keeping the viewer in the dark regarding some aspects of the characters’ lives while still connecting him or her with the meat of the story. That is, the relationship between Takao and Yukari.

Needless to say, for you to be able to find out exactly how the entire thing unfolds, you have to watch The Garden of Words. What I can definitely say, however, is this: Shinkai does a wonderful way of simultaneously excluding the viewer from the finer points of the story until the right time, all the while avoiding complete alienation so as to make the movie far from enjoyable. It’s a detailed film, both in visual and in narrative, and certainly it requires the viewer to pay attention. One complaint I’ve seen online somewhere is this: that the film is called The Garden of Words, but Takao and Yukari don’t really say a lot to each other. I beg to disagree. In fact, sometimes, one does not need to say a lot in order to get the message across, and I believe the ‘words’ being pointed out here by the title is the tanka itself, that first message that Yukari leaves during the parting of the two’s first meeting, and the very message that ties up the climax.

A faint clap of thunder,
Clouded skies,
Perhaps rain will come.
If so, will you stay here with me?

– Yukari Yukino, The Garden of Words

If you’re getting a little lost in the discussion, that’s okay. Go watch The Garden of Words. The thing that I’m trying to point out, though, is this: subtlety can go a long way. The Garden of Words is a film, true, and films rely on visuals as much as they rely on the story itself. But regardless of the medium, if you are able to pull off such subtle tones as the ones Shinkai did, then you’re a champion. Of course it’s hard. Subtlety requires wit and the belief that the audience will understand the nuanced layers of the story. Which, I think, worked well with Shinkai anyway. He exposed the characters’ lives – at least, one of the characters’, during the first part of the story – while furthering the story between Takao and Yukari, and so does not center just on the relationship between Takao and Yukari, but also on both characters’ lives, giving them an added layer of personality and complexity. Shinkai then seamlessly weaves the separate lives of the two into the narrative that already has them intertwined from the start. In the end, Takao and Yukari “save” each other.

What the nature of this saving is, you’ll have to see for yourself (and if I haven’t driven home the message now, watch The Garden of Words). It’s a beautiful film with a beautiful story, and the lessons one can get from it are as indispensable as the feelings that come off it. Subtlety is beauty, and the feeling of successfully putting all of the pieces together is satisfying.

If you’re interested in learning more about the things I’ve mentioned here, then here are some quick links: