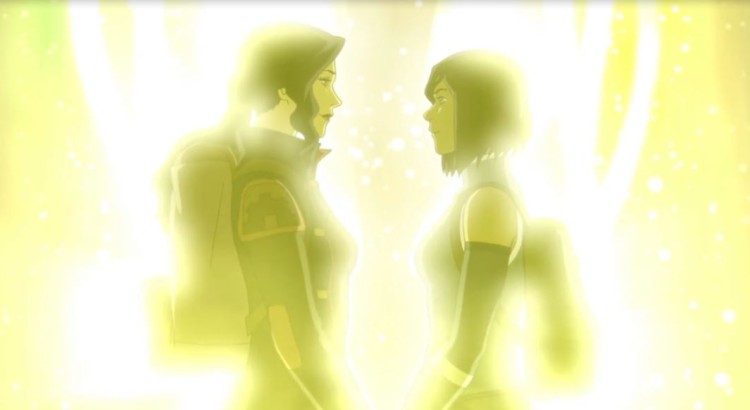 Note: If you’re here because you want to read about The Legend of Korra, but have not yet reached the ending (and I am aware that there are already a ton of spoilers over the Internet), even if you have already spoiled yourself, you might want to stay away for a while.

The recently concluded animated series, The Legend of Korra, sparked a lot of attention over the Internet since its finale back in the 19th of December. A spin-off of the long-finished and very popular Avatar: The Legend of Aang, Korra’s four-book run – with an average of thirteen roughly half-hour long episodes per season – tackled a sizable list of considerably mature topics for a kids’ show, with its episodes touching on death, politics, social class, religion, and power, among other things. Part of the reason why its finale basically broke the Internet was the final scene: main character Korra and supporting character Asami walk into the newly-created spirit world portal hand-in-hand, and as the camera pans upwards, the two face each other in what is supposedly a direct visual reference to wedding between two other Korra characters that happened just minutes before. The visual leaves the general idea that Korrasami – the pairing (or “ship” – short for relationship) name for Korra and Asami – is endgame.

Here, I would like to launch into a brief discussion of main text and subtext, and how these two kinds of texts manifest themselves within the TV show.

First, the three kinds of text. To explain quickly, main text is the immediate body of a narrative. You might want to think of this as the surface text. So to speak, the book itself. Or, in this case, the entire narrative of The Legend of Korra as it happened. Basically, what the plot is, what moves the plot, what conflicts stop and/or drive the plot, and the like. Subtext happens under the surface, and is not an explicit declaration of anything. Think of subtext as a suggestion of a character’s intent, the relationship dynamics between characters or societies within a narrative, and you have an idea of what subtext is.

Now that he have that out of the way, it’s Korra time.

Getting back to the ending scene of the entire series, there are, from what I’ve read and seen, two prominent reactions towards it: raves, because Konietzko and DiMartino – collectively known as “Bryke” – have managed to end the series (already known for its dark themes) on a positive note with as explicit a representation of an LGBT relationship – in this case, bixesuality – as they can get on a kids’ animated show, and; complaints, because there are fans who felt that the ending was fanservice, that it was shoehorned in, and that there was no proper build-up and therefore the Korrasami ending is unrealistic.

Bryke have given their statements regarding the ending, confirming that Korrasami is endgame, even if there was no kiss, even if there was no explicit mention. What I want to do here, though, is not present Bryke’s statements (though way down there, at the bottom of this post, are links to said statements), but address what I think is the prominent complaint regarding the Korrasami ending by looking at primarily at main text and subtext.

Some viewers say that the ending was the result of bad writing and fanservice, and it was because of the bad writing – with Korrasami having no build-up – that the ending fell flat. I beg to disagree, though. The Legend of Korra, being an animated show, banks on visuals and audio as much as it does on dialog when it comes to telling Korra’s story. What is being said, explicitly, is what we will consider to be the main text of the show. Essentially, how Korra and company interact with each other verbally are the things that make up LoK’s main text. Small details – characters blushing, events that are framed in the background instead of the foreground, eating habits, character positions, and many other things – make up the subtext. They are not explicitly stated, but suggest certain relationship dynamics between characters. How Mako and Asami, for example, interact in the first episode of Book 4, after a three-year separation, may be seen as an evolution in their relationship between each other, having gone from being together to being friends.

As for the “bad writing,” it is only bad writing, I believe, if we only look at the main text. The build-up between Korra and Asami’s relationship – from friends to something else – is developed over visual cues and hints, starting from the third book. Among other things, Korra and Asami begin, in earnest, their friendship at the start of Book 3, as Korra and company help the world acclimate to its newfound closeness to the Spirit World. Korra and Asami are afforded opportunities to get to know each other, especially in Korra and Tenzin’s quest to gather new airbenders and rebuild the Air Nomads. I won’t get into the details, as there are a lot of details, but worth noting is the fact that it is Asami who takes care of Korra after Korra is severely injured by anarchist Zaheer at the end of Book 3, which is where I believe a relationship transcending friendship takes off.

I haven’t been able to clearly and strongly touch on the idea of build-ups and good endings in The Legend of Korra, and I probably won’t be able to if I don’t give screenshots or of you haven’t watched the entire thing yet. But, keep in mind this: main text and subtext play off each other. In an animated show like Korra, to better understand the entirety of the story, one must be able to pay attention to even the smallest details, and connect these to the whole picture.

The point here is that it is important that a creative work must be able to let its explicitly stated intent and its implicitly expressed intent play with each other to lead to the point where the reader – or viewer – is not left feeling cheated by cheap shots or fanservice. Whether or not Korra’s ending – or maybe the entire show itself – was badly written, I’ll leave to you, but a creative work must be able to express itself effectively and fully not just through explicit statement, but suggestion. If both the main text and the subtext manage to effectively convey what the author/s intended to convey to the general audience, then that is – regardless of what others may say – good writing.

And Korra was, to me, well-written enough, especially for a kids’ show tackling some serious themes.